The dark arts of Pruning 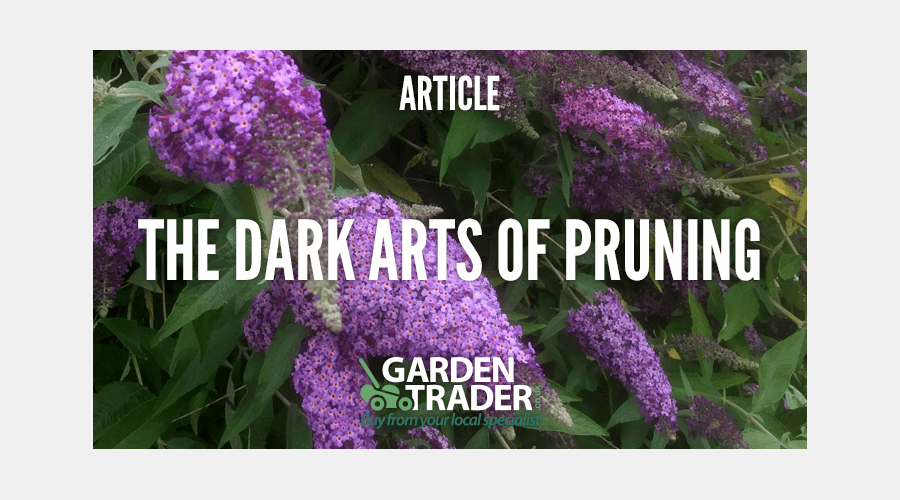 The key to successful pruning is building up a knowledge of pruning techniques, understanding growth habits of plant, trees and shrubs, correct choice of pruning tools and learning from your mistakes.
There are many reasons for pruning :- to promote flowering, to invigorate a weakened plant or simply to bring an overgrown plant back into a manageable shape or form.
For example, maintaining a private hedge requires regular pruning with shears/ hedge trimmer to maintain its shape and size. Fruit trees need pruning to encourage new fruiting spurs. Roses need pruning in the spring to invigorate new growth.
A good starting point for pruning any plant is to remove dead, diseased, or damaged stems as soon as you see them. Dead stems attract insects and invite diseases to develop.
Also remove crossing branches, water sprouts (vigorous upright growing shoots that form on trunks or side branches), and suckers (vigorous shoots that develop near or from below ground).
Once you have done this, there not much left to worry about, the method of pruning will then be dictated by the type of shrub and plant material you have in terms of it being, an early spring flowering variety, summer flowering variety or winter flowering. Other forms of pruning are for controlling growth, especially when managing hedges and young trees.

Spring-Flowering Trees and Shrubs
Early-spring flowering shrubs, such as lilac, forsythia, and rhododendron, bear flowers on wood formed the previous year. The best time to prune them is late spring, immediately after they finish blooming. If you prune them later in the growing season or during winter, you'll remove flower buds and decrease the amount of spring bloom. To keep spring bloomers flowering vigorously, remove some of the oldest shoots all the way to the ground. This allows younger stems to grow and bloom.
Summer flowering shrubs, such as potentilla, buddleia ( butterfly bush), produce their flowers on new growth from the current season. Prune them in winter while they're dormant, or in early spring just before they push out their new growth. You can even cut them all the way to the ground in late winter, and they'll still bloom that same summer.
Most hydrangea types -- pink, blue, or white mopheads and lacecaps, bloom on old wood. Prune these types of hydrangeas before midsummer. If you prune them in winter or early spring, you'll be removing flower buds.
Shrubs such as boxwood and privet are often sheared to form a hedge. To maintain a solid wall of green screening, shear the new growth frequently during the early part of the growing season. Keep the top narrower than the base so that the upper branches don't shade the lower ones. Also, be mindful of birds nesting in the spring, generally most hedges are pruned late June after the birds have nested and flown.
With regard to roses, treat climbers and old garden roses that bloom only once per year the same as other spring-blooming shrubs: Pruning after they finish blooming. Repeat flowering including hybrid teas, floribundas, grandifloras, miniatures, and modern shrub roses are pruned mostly to shape the plant or to remove winter-damaged canes. If they become overgrown, cut them back in early spring.
Free-standing fruit trees or bush trees, such as those grown in an orchard should be pruned when they're dormant, in winter. Trained trees, such as espaliers, cordons, pyramids and fans should be pruned in late August or early September.

Non- mechanical hand tools
As for tools invest in good quality makes, do not buy cheap and gimmick tools, look out for robust well-made tools, that come with decent guarantees. A variety of tools are used for pruning, these include secateurs, loppers, long reach pruners, tree pruning systems and saws.
There are two basic types of secateurs, bypass and anvil. Bypass secateurs tend to be better suited for general and lighter work, ideal for deadheading roses or cutting back larger perennials like hollyhocks and dahlias, while anvil secateurs have a solid surface called an anvil or table on which the cutting blade comes to rest, therefore they are highly appropriate for use on older wood and tougher plant stems.
Anvil loppers can be used to tackle the pruning of larger shrubs and can sometimes cut small branches from trees, the cleaner cutting is better for trees such as plum or cherry, so as to help prevent pests and diseases getting in and infecting the plant. Loppers can also come with telescopic handle to help you reach higher pruning jobs.
For larger branches that loppers and secateurs can’t cut, the next stage is to use a pruning saw. Especially made with saw teeth that only cut on the pull stroke. For cutting larger size branches, you can then use a Bow saw, which come in a range of sizes.

Mechanical hand tools
If you are faced with a lot of pruning there are a number of mechanical hand tools available to help speed up the job of pruning, these come in the form of motorised/ battery powered tools namely hedge trimmers, chain saws and some hydraulic secateurs. When using powered tools, it is important you wear protective clothing and have appropriate safety training in the use of these tools.
As for makes there are plenty of choices, with Felco, Fiskars, Spear and Jackson, Wilkinson sword, Bulldog and Gardena to name a few for a selection of non-powered pruning tools, as for powered tools, popular manufacturers include Sthil, Husqvarna, Echo, McCulloch, Efco, Pellanc and Bosch all offering a fine choice and range of chain saws and hedge trimmers.