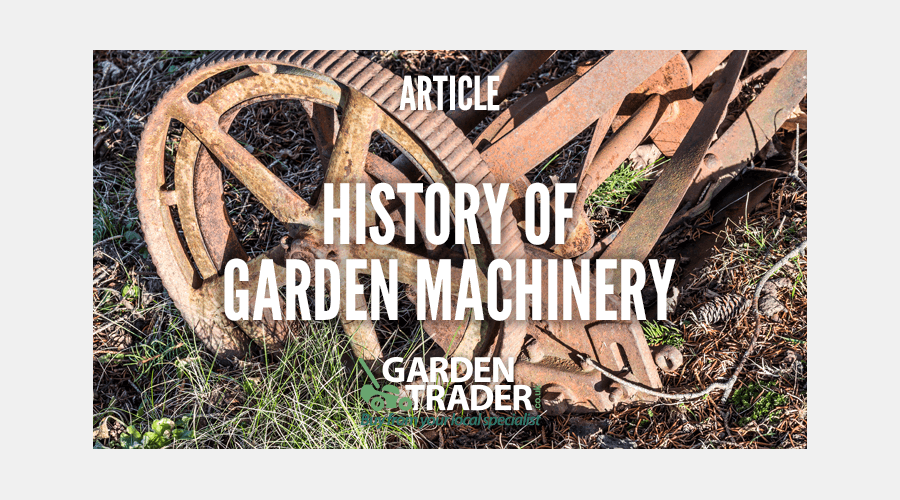 France in the 1700's saw the start of formal grassed areas appearing with neatly cut grass created by grazing animals or hand-cut with shears and scythes. The first tool ever used to cut grass to resemble a lawn finish was the scythe. The scythe was made up of a long wooden handle with a support arm which held a slightly curved blade; the operator was required to sway their body from side to side to ensure the blade sliced the grass as they moved forward. This proved to be physically hard and tedious work.

Using a scythe was the only option for lawn creation until the 19th century. The first lawn mower was invented by Edwin Budding in 1830 in Thrupp, just outside Stroud, in Gloucestershire, England. He was granted a British patent on August 31, 1830 on a lawnmower design based on a tool used to uniformly cut carpet and comprised of a series of blades around a cylinder. His hand propelled or horse drawn mower was designed primarily to cut the grass on sports grounds and large gardens as a less labour intensive and easier to use alternative to the scythe.

The mower that Budding invented was fitted with a large roller which used gears to provide power to drive the cutting cylinder. The cutting cylinder was made up of multiple blades connected in a series of evenly spaced curvitures shaped and assembled in a cylindrical fashion, as the cylinder turned the blades then met with a fixed straight blade along the bottom of the cutting area creating a shearing effect on the grass leaving a beautiful fine finish on the lawn along with the now famous British striped effect created by the heavy roller.

Budding joined up with John Ferrabee, a fellow British engineer. Armed with the patent they were able to start manufacturing and selling the product. They then licensed other companies, allowing them to manufacture the Budding designed mower. During the 1850's those companies were permitted to design and produce their own mowers when Budding's patent ran out.

Although lighter push mowers became available, mowing grass remained a long laborious chore creating a desire for self powered mowers. Using horses to tow a mower was no longer an option. During the late 1890's steam power was used but proved inconvenient due to the time it took to fire up the required steam.

Then in 1902, a real breakthrough. Ransomes, Sims, and Jefferies introduced the first internal combustion petrol powered engine able to power a lawnmower. These engines heralded the beginning of powered garden machinery.

Founded in 1908 in the USA by a partnership between inventor Stephen F. Briggs and investor Harold M. Stratton, Briggs & Stratton was already providing power for innumerable agricultural and military applications by the 1920s. In 1953, however, Briggs & Stratton revolutionized the lawn and garden industry by developing the first lightweight aluminum engine. This light aluminium engine improved the ease of use of rotary lawn mowers and was further advanced in 1958 with the introduction of Kool Bore™ (all aluminum) and Sleeve-Bore engines.

B&S engines came with a choice of horizotal crankshaft engines used for powering cylinder lawnmowers, tillers etc or vertical crank shafts for powering rotary cutters of all makes and types including ride on tractors and walk behind mowers of numerous types and sizes.

Following the success of R.S&J. and B&S many other small engine manufacturers appeared from Italy, Japan, UK and in more recent times, China.

Companies such as Charles H Pugh, known as the Atlas Chain Company from Birmingham designed and made their own mower for mowing around the factory grounds in 1921; it was so good they decided to go into production and so the ATCO brand was born followed by the well known Suffolk and Qualcast brands carrying forward the more affordable offerings for the mass market.

In 1959 Thomas Green & Son Ltd, Leeds introduced the first chain driven mower, which they called the Silens Messor or 'silent cutter'. A much quieter and lower cost solution which Greens acheived by using chains to link power from the roller rather than gears. Greens, along with Ransomes and Shanks of Arbroath domintated the mower market up until the first World War.

Manufacturers continued to develope smaller, lighter weight designs along with more powerful engines during the 1940's and in the 1960s, the use of plastic materials was introduced to help bring down the weight of machines and cost of producition.

It was in the 1950's the first British designed rotary bladed mowers appeared, Shay being the first, hotly pursued by two of the biggest rivals of the 50's, Hayter and Mountfield. These brands have dominated the petrol powered mower market since, more or less banishing the petrol cylinder mower due to the low cost of upkeep and the use of a rear roller to maintain the traditional British stripes first created by Budding's design. These iconic brands continue to be favoured by many today although there is lots of hot competiton from China, Germany, Italy, Japan and the U.S.A. including brands such as Alko, Cub Cadet, Honda, Husqvarna, Lawnflite and many more.

Electric powered mowers and rotary cutters were invented in the 1920's and 1930's but there developement to go to market didn't happen until many years later during the 1960's when Black and Decker, Qualcast and Flymo created the first mass market mowers at affordable prices for the smaller gardens.

There are many technical aspects that make up the final production of all garden machinery; from the drawing board (cad-cam) to launch in the garden can take up to 5 years costing millions of pounds in market research, research and development, component design and production, ergonimic design and final assembly design; just like cars.

Garden machinery available today did not develop over night, its nearly 190 years since Edward Budding started the mechanised garden revolution and even today the revolution continues with innovation after innovation creating easier and cheaper mechanised solutions for the ever popular British pass time that is called gardening.

The next stage of the on-going revolution has started and it involves battery driven Cordless Garden Tools which look set for a long period of sustainable contribution to the seemingly never ending search for effortless gardening and the total elimination of the nightmare of the 'grim reaper' that is the dreaded scythe.

One has to wonder if Edward Budding ever dreamt that his invention would end up with hundreds of manufacturers employing hundreds of thousands of people and an insatiable worldwide consumer demand creating a multi billion pound market.